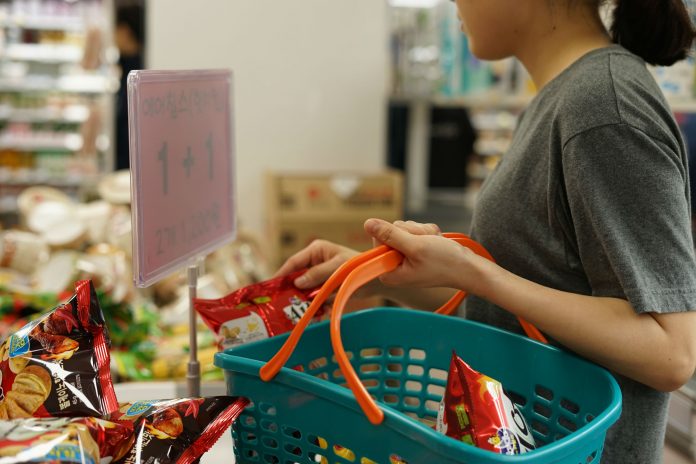 Before entering the mart, write a shopping list carefully. ‘I have to buy only the things I need’ to make my mind. However, when entering the mart, phrases such as ‘regret if I miss it’ and ‘only for today’ are catching up. I tried to resist the temptation and went back to the food corner, but the employee’s older sister said,’If you buy it now, I will give you one more. He rationalizes himself and puts it in the cart, saying it was necessary anyway. In the cosmetics corner, new hand creams from the brands you usually liked are also included. After shopping, just before handing out the card in front of the cash register, he grabs a sausage for snack on his way home. Every time I check a receipt, I think about it. ‘When did you buy so much?’ What happened in the mart?

A subject wearing a wireless headset-shaped device on his head watches an advertisement. On the outside, it is not different from our appearance watching TV at home, but the *EEG (EEG) measuring device worn by the subject collects more than 250 brain waves per second. Through the EEG measuring device, the experimenters observe the emotional response of the subject that changes frequently even during a short advertisement of 15 seconds. Based on the measurement results, the experimenters find out in which scene the subject’s attention has increased or whether the subject’s arousal has increased due to the appearance of a specific person. The results thus obtained provide marketers with important clues about consumer tendencies. This is a collaboration between a brain scientist and a marketer, neuromarketing.

Neuromarketing is a compound word of neuro and marketing, which means neuroscience, and is a technology that finds out the psychology and behavioral direction of consumers using the reaction of the brain when consumers send their gaze and applies it to marketing. Neuro research technologies used in neuromarketing include an electroencephalograph that measures the flow of electricity generated when the brain waves are transmitted and an eye tracker that captures information where the eye catches.
Neuromarketing compared the taste of each cup of Coca-Cola and Pepsi in 1975,’Pepsi Challenge!’ It was born from a medical student who questioned the results of the experiment. In the experiment, the public replied that Pepsi tasted better if Coca-Cola and Pepsi were not labeled, but Coca-Cola was more delicious if the two labels were on the cup. This was the result of the Coca-Cola brand acting on consumers’ unconsciousness. Coca-Cola’s marketing influenced consumers’ unconsciousness and led to the evaluation of taste. Later, Harvard University marketing professor Gerald Zaltman devised the Saltman technique (ZMET) in the 1990s to show pictures to consumers and induce associations with them. Neuromarketing, which began with Saltman’s technique, continued to develop and was introduced to the world in 2002 by a marketing company called ‘BrightHouse’.

Currently, neuromarketing research is being actively conducted mainly overseas, but domestic cases are also gradually increasing. According to Shin Hyun-jun and Lee Eun-ju’s 『Principles and Examples of Neuromarketing』, Neuromarketing was introduced to USA around 2002. Amorepacific (hereinafter referred to as Amore), a domestic cosmetic brand, is one of the earliest companies that introduced neuromarketing techniques in USA. Amore entered the color cosmetics market in 2004 and conducted neuromarketing research. It was to understand the image of consumers about Amore. As a result of observing the brain after showing a photo of color cosmetics to women, foreign brand products became the object of excitement and immersion to consumers, while the Amore brand had a strong image of a familiar ‘old lover’. Unlike overseas luxury brands, Amore brand products were recognized as a popular image of mid- to low-priced among consumers. Based on these research results, Amore focused on creating a more luxurious brand image, and as a result, it entered the department store distribution network for the first time among domestic brands.

Neuromarketing is also used to name products or construct designs. Kia Motors’ semi-large sedan K7 is the result of Neuromarketing. K7 is made in the ‘Alphanumeric method’ that combines alphabets and numbers. The alphanumeric method is a method used mainly by foreign car brands and can give consumers a luxurious feel, but there was a concern that it did not match the ‘young sensation’ that Kia Motors put forward as a brand image. Kia Motors’ brand management team chose a neuromarketing research method to compensate for the limitations of this alphanumeric method. Through neuromarketing, it was decided to select the combination of numbers and alphabets with the highest consumer preference. KAIST Professor Jae-Seung Jeong, who was commissioned by Kia Motors for neuromarketing research, conducted eye tracking and *fMRI techniques for 100 Americans and 100 foreigners living in America for 3 years or more. As a result, it was confirmed that the subjects felt a strong preference for the car name K7 and came up with an innovative and luxurious image. In June 2010, Kia Motors’ K7 also doubled the sales of Hyundai Motor’s semi-large sedan’Grandeur’.

Neuro Research, a map showing the brain of consumers

Neuromarketing is done through neuro research, which measures brain response and behavior. NeuroResearch has methods of measuring the brain, such as fMRI and EEG. The method of measuring brain waves is used to analyze the interest of momentary scenes such as video advertisements. In addition, researchers use fMRI to monitor brain responses to measure consumers’ subconsciousness or prejudice toward brands. Methods of measuring behavior, such as eye tracking and skin conduction, are also part of Neuro Research. Researchers can analyze the path through which consumers perceive product images through eye tracking reactions. “Because neuromarketing is based on scientific measurement, it is possible to measure concepts that are difficult to express in language.” It is possible to derive complex information into data and images.”

Neuromarketing by our side

Examples of neuromarketing can be easily found around us. What are the neuromarketing hidden in convenience stores and marts that we use every day?
At 2 pm on weekends, they enter a large mart. Mart is people who come to the market and there is no time to step. Pull a cart and join the shopping line. I’m trying to buy only what I need, but quiet and slow music comes out from the mart. Just when you enter, your impatient mind calms down, and your steps slow down with slow music. As you enter the kitchenware section to buy the necessary items, the red phrase ‘20% SALE’ catches your eye. Even though the price is the same, 39,800 won in red looks cheaper. I barely resisted the temptation of ‘1+1’, but the phrase ‘limited sale’ without any doubt collapses. I don’t think I’ll be able to buy that product again unless it’s today, so I put things in my cart that I don’t need. When I compare several products to buy cereal, the middle products where my attention stays are more expensive than other products. Inexpensive products are at the top or at the bottom.

The music flowing in the mart, the color of the price tag, and the display of products are not accidental. According to Woong Heo, director of the Brand Strategy Research Institute of Oricom, marts and department stores that people often visit are an aggregate of neuromarketing. The speed of in-store music affects how long consumers stay in the store. This is why department stores use slow music. Playing slow music allows consumers to stay in the store longer, and the longer the consumer stays, the more products the salesperson will be able to purchase. There is also a reason that the price tags of products are mainly red. Director Huh said, “Red gives consumers the expectation of ‘price destruction’ and has the effect of fixing their eyes on the price tag.” If you want to increase the sales rate, it is better to emphasize the ‘damage’ that occurs when the consumer does not purchase the product rather than the ‘profit’ that the consumer will get. Consumers feel the damage they suffer when they can’t buy a ‘limited sale’ item out of stock than the profit they get with ‘1+1’. Because from a neurological point of view, the brain is more sensitive to damage than to profit. Neuromarketing technology is also hidden in product display. The so-called ‘Gold Zone’, with a height of 150 to 170 cm, is the place where consumers go the most. Therefore, salespeople mainly display high-margin products in the gold zone.

*fMRI (functional Magnetic Resonance Imaging): Functional Magnetic Resonance Imaging. It is the most used method when imaging brain function. When the brain is active, it measures the amount of oxygen in the bloodstream that changes and shows the activated parts of the brain.
*EEG (Electroencephalogram): EEG. It directly shows the reaction of human brain activity. Neuro Research observes consumers’ mental activity and emotional reactions by measuring brain waves that change while consumers view advertisements or purchase products.