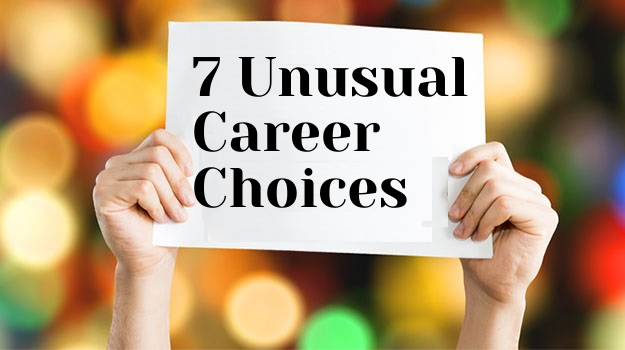 Bored of the 9-to-5? The traditional career is dying as technology makes many obsolete, and job security is a distant dream. Stuck in the gig economy or in roles that drain all motivation and enthusiasm for life, more people than ever are looking outside of the career box and considering alternative options. There are lots of weird and wonderful jobs out there, but they can be hard to get into because there is simply a lack of information about them. If you’re bored of making other people rich or spending more hours working than enjoying life, there might be a lot more options available to you than you thought. Here are the most unusual career choices that could be the key to a much more satisfying life.

Everyone loves a good nap, but what if you could get paid for those snoozes? It’s quite well known that NASA posts occasional vacancies for professional sleepers, but they aren’t the only business that needs people to climb into bed for a night of deep sleep. Universities have been known to conduct long-term sleep research, and some hotels even pay someone to warm up beds for their customers. Becoming a professional sleeper might not be the easiest job to find, but being paid to nap is a goal worth aiming for.

One for the British, maybe, but there’s good money to be made from standing in one spot for hours on end, with the occasional shuffle forward when it’s least expected. You don’t need any qualifications, although having a little zen-like calm might stand you in good stead. There are a lot more employment options than you think too. Look at busy tourist attractions to start with. Most tourists don’t want to resign themselves to hours of queueing when there are other places to explore, so may be prepared to pay you to take their place and phone them when you’re getting close to an entrance. Another option is for local shops to hire you to stand outside to make their business look busier. The salary will vary, but professional queuing is a lot more feasible than expected.

Any kind of career where you act as a broker for something is always a good career option. That’s because you have to handle very little in the way of logistics, need very little in terms of expensive technology, and often spend most of your time simply connecting businesses with each other. A freight broker can be especially lucrative, especially if you’re good at problem-solving and communicating. It’s a lot easier to get started than you might think too. Simply do some training and chat with people currently in the role. Then, apply to get your freight broker’s license, and you’re good to go. The best thing about being a freight broker is that there’s no earning cap, so it can be very profitable indeed.

This is a much-sought-after job, so be prepared to put some work in. The good news is that there is more than one whiskey company looking for professional tasters, so there may be more opportunities than you think. The current Jack Daniels Bourbon taster does have a degree in chemical engineering, which might be a bit more prep work than you’re prepared to put in. In most cases, you’re probably going to need to move to Ireland or Scotland if you want to get paid to drink scotch, and you’re going to need to fight a lot of applicants who will be just as desperate as you to get one of the best jobs on the face of the earth.

There are a lot of people in the world who claim to be pet psychics, and they’re in quite a lot of demand. If you’re especially skilled at telepathy and can understand the thoughts of animals, then really, this is the job that you’ve been waiting for all your life. Of course, some of the people that advertise their services as pet psychics aren’t actually claiming that they can read the thoughts of your pets. Instead, they are professional animal communicators who have a thorough understanding of animal behavior and body language. However, there are plenty of people advertising their services as people who can literally read the thoughts of pet cats and dogs. There are even courses for animal communication, so you can even get yourself ‘professionally qualified’.

At festivals and fairs all around the world, you’ve probably seen people wandering around covered in body paint. In most cases, those partygoers didn’t paint themselves. Like the idea of covering other people in paint? Then becoming a professional body painter is quite feasible. You’ll need some artistic talent, of course, but you certainly don’t need any formal qualifications or certifications. What you will need is the material that you’re painting with, a trader’s license to sell your services at events, and some serious marketing savvy knowledge. For some, this is a dream job, but for others, it would be an absolute nightmare. Becoming a professional body painter might not be the most lucrative career in the world, but it’s certainly unique.

Don’t go into a job interview for a snake milker thinking that you’re literally going to be milking snakes. Snakes are reptiles, and that means that they don’t lactate and don’t produce milk at all. What snakes do produce is venom, and as a professional snake milker, that’s what you’ll be doing all day: withdrawing venom. This isn’t a job for people with shaky hands or a nervous disposition. Snake milkers remove the venom from a snake and sell it, but they sell it for a lot of money. Just one gram of some venoms can sell for $4,000! You will need to get a degree in biology, chemistry, biochemistry, or herpetology, though.

If the office is draining your soul and you’re tired of staring at computer screens or dealing with arrogant customers all day, then it might be time to quit. Some of the jobs on this list are absolutely bonkers, but they are a great way to start thinking more creatively in terms of employment options. You might not want to become a snake milker or a pet psychic, but think about what you do enjoy. Life is more than work.