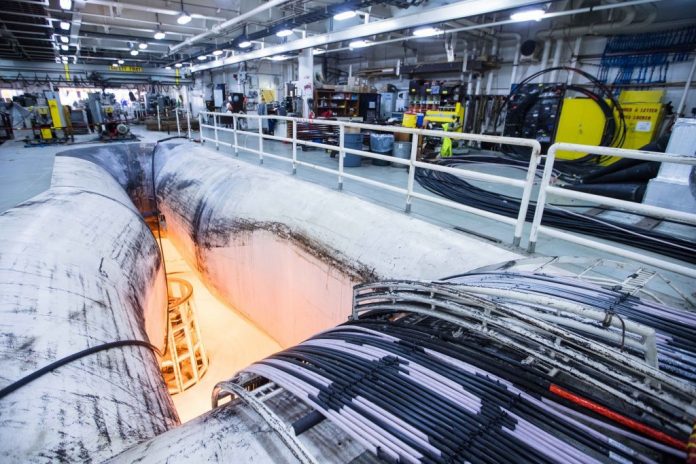 Modern business relies heavily on speedy transnational communications. In fact, the history of business could be understood just by looking at how commerce has been enabled by and promoted the development of communication technology. The story of the first transatlantic cable is important not just in business, but in international relations, technical innovation and seafaring histories.

We are used to using wires and cables for all sorts of things, but their use was limited in communications before the 19th Century. The 14 gauge steel wire that we use to bale recycling is not so different from the wire the ancient Egyptians used to make jewelry, but it shares very little in common with the wires that make up undersea cables. Here is the story of the first transatlantic undersea cable, and the ship that laid it.

In 1858, a lavishly funded project to lay a transatlantic cable was undertaken by British and American engineers. It was doomed to failure. The cable was destroyed in an accident after only a month of use. Our story concerns the far more successful 1865 SS Great Eastern cable laying, widely recognized to be the first successful transatlantic cable installation.

After the failure of the 1858 cable, some drastic changes had to be made. The old cable had been destroyed by applying too much voltage after quality swiftly deteriorated. The new wire was designed to counter this – providing clear telegram signals across the Atlantic ocean for a long time. The cable was completely redesigned, and consisted of a core of seven pure wires of copper covered with layers of hemp and high tensile steel wiring. It weighed a whopping 4,000lb per nautical mile, twice as much as the original!

The SS Great Eastern was chosen to lay the cable. She was by far the largest ship the world had ever seen, and would remain so for four decades after she was launched. The SS Great Eastern was one of the final designs overseen by the legendary Isambard Kingdom Brunel: one of the great innovators of the Victorian age. She had five masts, the world’s largest steam paddles and a gross weight of 22,000 tons. By 1865, she was no longer profitable as a passenger ship and so made a perfect charter for the transatlantic telegraph cable.

On July 15th 1865, the SS Great Eastern left the Thames Estuary, captained by Sir James Anderson. The trip got off to a great start, but disaster struck on August 2nd, when after 1,062 miles of cable had been laid, it snapped and the end was lost beneath the waves.

What followed was an unbelievable effort helped by some absurd luck. Search boats went out to look for the snapped end of the cable, blindly lowering grappling hooks to the ocean floor where the captain had reported the snap. Unbelievably, the cable was found by the HMS Terrible and the grappler SS Albany. Men wept aboard the SS Great Eastern when the snapped wires were hauled on board. The mission went ahead, and reached Heart’s Content, Newfoundland on September 7th. The first successful transatlantic cable had been laid.

Handy tips to pick the best Dyson vacuum for you!