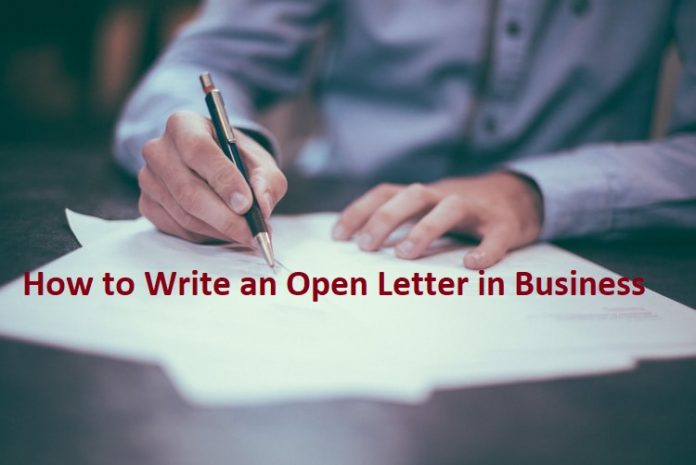 There are two main types of open letters.

As social media and networks grow from strength to strength, open letters are evolving and becoming an increasingly popular way of communication.

Some people mistakenly believe that an open letter can be a loose and ‘free style’ form of communication. You cannot get away from the truth. If designed to attract the attention of a large number of readers, the letter must be subject to, closely written, and appropriate. Public letters need to be influenced by strong writing and are achieved through careful planning.

The easiest way to plan an open letter is to ask three simple questions. These tips will help you think about the most effective way to write an open letter.

Who is your audience? Knowing the typical readers of your letter can help you communicate the tone and language of the letter to draw the reader’s attention. This is important because their names are not at the top of the letter. So the letter has to find another way to’talk’ them. Characters that differ from newspaper to newspaper are adjusted to the tone of the readership. Traditional’broadsheet’ newspapers use a completely different tone from tabloid publications.

What is your letter? You should be able to summarize the points of the letter in one sentence. If you can’t, find a way to simplify the argument or opinion. The narrower the subject area, the stronger the letter will be. When the letter affects, the reader reads from the first word to the last word.

What is your Goal? Every letter has a purpose. An open letter has a very specific purpose because you have chosen to communicate in such an open way. This determines the style, tone, and content of the letter. Letters may be designed to motivate people to act or follow directions, and you may want to induce discussion, generate certain emotions, raise awareness, or stimulate thoughts.

Clear Your Message in Open Letter

Organize your message in clear and concise bullets. Each point is looked at in turn and numbered according to the ranking system.

This should reflect the importance of each point and the order in which they should appear in the letter. Make sure each point follows the previous point in a logical and fluid way. Failure to achieve this is annoying and distracts the reader.

When to Write a Open letter

If possible, write letters at once. This keeps the flow and makes the letter more enthusiastic. See the bullets as you proceed. Then you don’t wander and lose your thread.

When you’re done writing your letter, simply scan your document for basic errors like spelling or grammar errors. Clean up your letter and come back later. This way, even if you’re only writing for an hour, you can objectively re-evaluate your work with a slight distance from the writing.

When editing and refining letters, look for common pitfalls such as:

Public letters can be incredibly powerful, but there are a lot of pitfalls because you have to deliver targeted messages to more than one person. If your message is strong and the methods you use to help you write it are logical and prudent, you should be able to write a letter to be proud of.

The Duties of a Warehouse Sorter

5 ways to improve reporting in business

5 Critical Actions to Take to Become a Successful Entrepreneur